We Told You There Would Be No Certainty, in Helsinki Festival International Showcase

We will present parts of We Told You There Would Be No Certainty in 20 minutes and talk about the piece that will premiere in December 2018.

Over the last six years, UK-based choreographer and designer, Theo Clinkard, has built a reputation for creating affecting and visually arresting work. Recent commissions for Tanztheater Wuppertal Pina Bausch and Danza Contemporanea de Cuba, alongside creations for his company, have established him as a fresh choreographic voice and earned him both critical acclaim and a loyal following.

Clinkard’s work has long been dealing with balancing practical and poetic languages within performance, designing choreographic structures that allow space for sensorial experience for performer and audience alike.

”We told you there would be no certainty, is a distillation of this ongoing practice, housed within the bodies of two exceptional performers, Maria Nurmela and Ville Oinonen. ”

”For this duet, one single movement task sustains over the duration of the work to provide an ever shifting physical, emotional and metaphorical landscape acting as a prompt for us to recognise the multiple, complex and layered states of being together.” 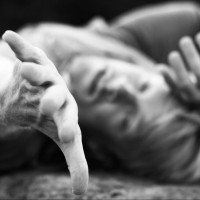